The development of oxaliplatin-loaded polycaprolactone (PCL) nanoparticles could be an efficacious therapy for non-small cell lung cancer (NSCLC), according to the results of a preclinical study published in the DARU Journal of Pharmaceutical Sciences. 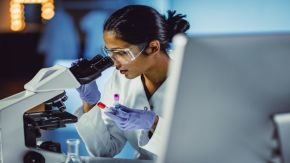 In the study, researchers prepared and characterized PCL nanoparticles of oxaliplatin as a potential anticancer agent. Oxaliplatin has better tolerability than other platin compounds; however, it is associated with several negative side effects that limit the range of usable doses. Notably, conventional chemotherapy requires high drug dosages. And, because of the side effects and limited bioavailability of platinum-based chemotherapy, intravenous administration is not the usual route for targeting the drug to the lungs.

Controlled release systems, such as nanoparticle delivery, limit the adverse effects of the drug, while delivering prolonged effect. Nanoparticle administration also improves permeability and retention of drugs in tumor tissue.

“The shape, size range, and drug loading of nanoparticles are essential factors in drug targeting, and these parameters are affected by several factors, including the amount of polymer, preparation method of nanoparticles, percentage of surfactant, applied energy amount, and volume of organic and aqueous phases,” the authors of the study wrote. “It is not easy to show the effect of all parameters and optimize the formulations.”

The properties of PCL nanoparticles

The researchers chose PCL for preparation of the nanoparticles because of its biocompatible and biodegradable properties, increased cellular uptake by the mucosa, and sustained release properties.

The investigators employed a 33 full-factorial design to study the cumulative effect of the selected variables on the nanoparticle characteristics and to optimize PCL nanoparticles. They assessed optimized nanoparticles for efficacy in the NSCLC, employing the SK-MES-1 cell line.

Of note, 33 full-factorial design is a three-level design, which means that three factors are considered at three levels: low, intermediate, and high. The three factors included homogenization speed, the stabilizer (polyvinyl alcohol, or PVA) and polymer (PCL) concentration.

Nanoparticle size mediates the residence time in the reticuloendothelial system and influences the cellular uptake of the drug (ie, zeta potential), according to the authors. The zeta potential is a necessary parameter for stability and encapsulation efficiency, which are ideally maximized to deliver the drug to the target organ.

“Homogenization speed and surfactant ratio represented the main factors influencing particle size and PDI [polydispersity index] and did not seem to depend on the PCL ratio. It was found that particle size was increased with the increase in the molecular weight of PCL from 10,000 to 45,000,” the authors wrote.

The initial burst release for all of the oxaliplatin-loaded nanoparticles tested occurred at 120 minutes, secondary to surface presence of the drug. The release rate significantly dropped when the molecular weight increased from 10,000 to 80,000 Da.

“The results show that the PCL nanoparticles may be considered as a promising carrier system for controlled release and targeted delivery of oxaliplatin with possible clinical application in NSCLC therapy,” the authors concluded.