Soda is one of the most demonized junk foods in the United States, topping just about every list of things to avoid for a healthier life. But it’s also among the most aggressively marketed beverage products on the planet. Coke and Pepsi, for example, together spent about half a billion dollars to advertise their namesake products to US consumers in 2019—and they’re making money back, hand over fist. 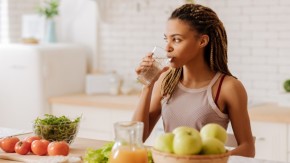 Recent studies suggest diet drinks may not be as good for you as you think.

This year alone, the average American will drink about 149 liters of carbonated soft drinks—that’s nearly 40 gallons. Such high levels of consumption earned soda companies $133.7 billion, or an average of $404 from every US consumer in 2019. These numbers are big, but they represent a 19% drop from the year prior.

Does that mean that consumers are getting wise to soda’s ill health effects? Possibly, but the carbonated drink market is still expected to expand by 6% annually through 2025. According to Coca-Cola, much of that growth is coming from—and will continue to come from—diet drinks.

Diet beverages are marketed as healthier—or at least, less harmful—alternatives to their sugary counterparts. Many people drink diet sodas to help cut calories and to avoid the well-known downsides of too much real sugar. But are these “healthier” alternatives really all they’re believed to be?

Carbonated soft drinks are generally defined as non-alcoholic beverages that contain flavoring, sugar or a sugar substitute, and water—with or without other additives, depending on the brand. This category can include sodas, energy and sports drinks, tonic, and lemonades (even though some of these aren’t necessarily bubbly).

There’s no doubt that an excess of sugar-sweetened beverages can wreak havoc on health, and lead to obesity, diabetes, heart disease, kidney disease, gout, decreased bone health, and cavities, among other ill effects.

But what about artificially sweetened beverages? Are they safe?

Six sugar substitutes are included on the FDA’s Generally Recognized as Safe (GRAS) list, and approved for use in food: aspartame, sucralose, saccharine, neotame, advantame, and acesulfame potassium-k. The plant-derived sweetener stevia gets mixed reviews from the FDA—high-purity steviol glycosides can be legally added to food products sold in the United States, however, stevia leaf and crude stevia extras are not on the GRAS list.

Even with these safety blessings, studies show artificial sweeteners come with some serious health concerns. Whether diet drinks are the healthier substitute is still up for debate. Still, “safe” and “healthy” are not necessarily the same thing.

The data on diet drinks

Recent data casts serious doubts on narratives conveying diet sodas as a healthy alternative to sugar-sweetened sodas. In a recent study, published in the Journal of the American College of Cardiology, researchers in France followed 104,760 participants with a mean age of 43 years from 2009 to 2019, who were asked to fill out three validated, 24-hour dietary records online every six months. During follow-up, 1,379 first instances of cardiovascular disease (CVD) occurred. Compared with nonconsumers, those who consumed higher amounts of sugary drinks were at 20% increased risk of CVD, while higher consumers of artificially sweetened beverages (ASB) were at 32% increased risk, even after adjusting for potential confounders.

Similarly, a 2015 systematic review and meta-analysis published in The BMJ, which included more than 38,000 subjects, found that artificially sweetened beverages had positive associations with type 2 diabetes incidence. What’s more, a 2017 review published in Nutrition and Obesity found that artificial sweeteners contributed to metabolic syndrome and the obesity epidemic.

Effects on the microbiome

Artificial sweeteners can help you lower your sugar intake, but it’s increasingly clear that the switch comes with a price—they “appear to change the host microbiome, lead to decreased satiety, and alter glucose homeostasis, and are associated with increased caloric consumption and weight gain,” wrote the authors of the 2017 study.

All of these effects are still being tested and confirmed via scientific study, but particular attention has been devoted to diet soda’s effects on the microbiome, which increasingly appears to be a key trigger behind artificial sweeteners’ negative effects.

One study, published in the journal Molecules, found that the six common FDA-approved artificial sweeteners (listed above) as well as 10 sports supplements that contained them, were toxic to the digestive gut microbes of mice.

In addition, in a cohort study published in Plos One, the authors noted that evidence from a rodent study showed that high consumption of sweeteners can contribute to weight gain and worse glucose tolerance because it induces dysbiosis—an imbalance between the types of organisms naturally present in the microbiome. “This is further evidence that consumption of artificial sweeteners adversely affects gut microbial activity, which can cause a wide range of health issues,” the authors said in a press release.

The study also suggests that consuming diet sodas may make us hungrier and trigger the brain’s food reward system in a way that encourages us to consume larger amounts of food. “Evidence from animal studies demonstrates that dopamine signaling in the brain may function as a ‘central caloric sensor’ that regulates nutrient intake accounting for the caloric density of food. Low-calorie sweeteners used as a sugar alternative may reduce food specific calories, but because they do not produce satiety, they can encourage more eating,” the authors wrote.

We’re still learning how diet drinks affect our bodies, and the evidence, much of which has been collected from animal studies, is not conclusive just yet. Still, it’s important to remember, the beverage industry is willing to spend billions to persuade you that diet drinks are a healthier alternative to sugar-sweetened beverages, but that doesn’t make it true.

If you want to play it safe, just follow the 2015–2020 Dietary Guidelines for Americans and reach for water, fat-free or low-fat milk, or 100% fruit juice to quench your thirst.